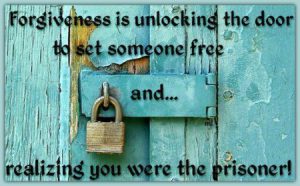 Forgiveness is not a way of forgetting the past.

Indeed, if you have been harmed, you should not forget it. You can learn from the past about how to avoid being harmed in the future. Nor is forgiveness a way of exonerating the perpetrator. Recognize that the harm did happen, that the other person is responsible for this and must come to terms with their own guilt. You do not need to try to minimize the harm or claim that the behavior was acceptable. When you forgive, you are not sacrificing anything or giving up your sense of self-worth. Indeed, you are doing just the opposite – by taking a stand that says that you are strong and finally free of playing the role of victim. Forgiveness is a way of declaring your integrity.

Forgiveness is a way of saying, “It’s time for healing. The pain of the past should now be put behind me.” Thus, forgiving is a way to express self-assertion and positive self-esteem. To forgive is to declare that your identity is centered around far more than the intense feelings that come from the past. It means that you have better things to do in life than continuing to live under the influence of the one who has caused you pain. Forgiveness implies that you no longer need to hold grudges – you no longer need self-pity or hatred, and you declare your independence from victimhood. Forgiveness signifies breaking the cycle of pain and abuse, giving up the belief that the other person should hurt as much as you do. It means abandoning the myth that if you hurt the other person, it will make you feel better. To forgive implies giving up the unrealistic hope that an apology will have the same meaning to the perpetrator as it has for you. It tells you that you are moving your energy from the negative to the positive.