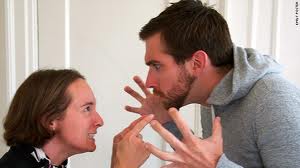 Relationships with frequent conflict may be healthier than one with no observable conflict.

Conflict between people is a fact of life – and it’s not necessarily a bad thing. In fact, a relationship with frequent conflict may be healthier than one with no observable conflict. Conflicts occur at all levels of interaction – at work, among friends, within families and between relationship partners. When conflict occurs, the relationship may be weakened or strengthened. Thus, conflict is a critical event in the course of a relationship. Conflict can cause resentment, hostility and perhaps the ending of the relationship. If it is handled well, however, conflict can be productive – leading to deeper understanding, mutual respect and closeness. Whether a relationship is healthy or unhealthy depends not so much on the number of conflicts between participants, but on how the conflicts are resolved.

Sometimes people shy away from conflict, and the reasons for this are numerous. They may, for example, feel that their underlying anger may go out of control if they open the door to conflict. Thus, they may see conflict as an all-or-nothing situation (either they avoid it altogether or they end up in an all-out combative mode, regardless of the real severity of the conflict). Or they may find it difficult to face conflict because they feel inadequate in general or in the particular relationship. They may have difficulty in positively asserting their views and feelings. Children who grow up surrounded by destructive conflict may, as adults, determine never to participate in discord. In this situation, the person may never have learned that there are effective, adaptive ways to communicate in the face of conflict.

People adopt a number of different styles in facing conflict. First, it is very common to see a person avoid or deny the existence of conflict. Unfortunately, in this case, the conflict often lingers in the background during interaction between the participants and creates the potential for further tension and even more conflict.

A second response style is that of one person getting mad and blaming the other person. This occurs when a person mistakenly equates conflict with anger. This stance does nothing to resolve the conflict and in fact only serves to increase the degree of friction between the two participants by amplifying defensiveness.

A third way which some people use to resolve conflict is by using power and influence to win at the other’s expense. They welcome conflict because it allows their competitive impulses to emerge, but they fail to understand that the conflict is not really resolved since the “loser” will continue to harbor resentment. Similarly, some people appear to compromise in resolving the conflict, but they subtly manipulate the other person in the process, and this, again, perpetuates the conflict between the two parties and compromises the trust between them. There are better ways to handle interpersonal conflict.