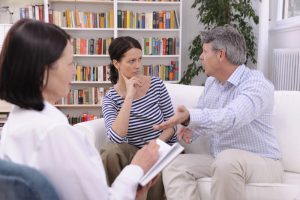 All couples argue. This is a normal and expected part of any relationship. Of course, some relationship experts say that arguing is healthy, while others say beware. While an occasional argument might be unavoidable and can even ultimately clarify boundaries within the relationship, a pattern of habitual fighting left unchecked puts the relationship at risk. Granted, when couples first meet, they may experience no conflict. This is the infatuation stage of a relationship when both people may feel they have met the perfect partner, and happiness reigns supreme. But as time goes by any relationship is molded not only by the similarities between the partners but also by the differences that bring interest, mystery, and complexity to the relationship. A healthy argument can clarify each partner’s needs and allow each to maintain a sense of personal integrity within the relationship. Each person can hold on to the qualities that made him or her attractive to the other in the first place. The difference between a happy and an unhappy relationship is often due to how the partners argue.

Some people avoid arguments out of apprehension that their underlying anger, which can get triggered during an argument, will go out of control. Others find it difficult to argue since they feel inadequate within the relationship. Some people were exposed to bitter arguments during childhood and they don’t want to repeat the pattern of their unhappy parents during their own adulthood. When people just hate to argue, for whatever reason, they frequently make up prematurely without resolving the issue in order to avoid conflict.

Or they may resort to fighting unfairly to gain power over their partner instead of coming to a compromise and strengthening their commitment to the relationship. When goodwill and trust are damaged, the probability of using dirty fighting techniques increases. If a relationship reaches the point where arguments are frequent and damaging, the couple may need to make a commitment to resolve the problem and try more productive methods of relating on difficult topics. Relationship therapy, which focuses in part on establishing new communication patterns, aims to facilitate this goal.
Arguments are not necessarily a sign of a failed relationship or that love is fading. They are often just a sign that the partners are expressing their own individuality, and this is healthy.

Seek counsel when you do not know how to engage fairly in a conflict or if you have not been able to resolve conflicts constructively. A qualified professional is not involved emotionally, will be more objective than any person involved in the conflict, and can teach you conflict resolution skills.

Protecting Your Couple When Arguing