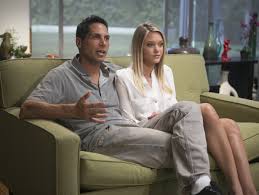 An interesting phenomenon happens when a partner is the recipient of a projection – the one being projected upon. Because this person is trying to smooth out the conflicts, he or she may identify with the projection. So, the couple now begins to define their problem in this way. The person receiving the projection starts to say, “Yes, I have a problem with being too dominant, and I need to work on it.” In fact, this person may start to behave in a way that confirms the projection.

It may never have occurred to this person that dominance was a personal issue in the past, but because it is brought up frequently through the first partner’s projections, the second person may create a self-definition that conforms to the projection. The recipient of the projection can either take in the projection – believing that it is true and behaving accordingly – or, in the more mature case, can modify it, insisting that the projection is not a true representation. In this case, the recipient can actually help the partner come to terms with his or her own issues and restore some health to the relationship.

The person doing the projecting may define the whole of the other partner as having the problem, and the recipient of the projection may do the same – to define the problem not just as a part of the self, but the whole self. When this happens, the couple may forget about the positive parts of each of the partners and concentrate instead on only the problematic areas. The mistake here is this –

when we work on our relationship conflicts, we need to draw on the positive parts of the relationship rather than focusing entirely on the problems.

When a couple first gets together, they focus on their similarities – those parts of themselves that are compatible. This is when the intimacy and trust of the relationship are formed. It isn’t until the relationship has matured that the negative projections begin to take shape. This helps to explain why some couples who were so perfect for each other in the beginning start to have conflicts as time goes by. When the negative projections begin, the partner doing the projecting tends to withdraw from the intimacy of the relationship and to focus more on seeking some independence. And the second partner may then withdraw as well. This is when the couple may start to experience serious relationship difficulties.